When a Recipe Makes Less Than 1 Package

For a while on ReciPal's nutrition label generator there was a requirement that the Packages Per Recipe field (now listed as "How many packages does this recipe make?") be at least 1 package. While that is basically always the case in a production environment, it's not always the case in development.

As an example, maybe you make a very small, say 1 ounce, recipe for testing purposes and want to see what the nutrition label would look like for that variation. If the package is potentially going to be 4 ounces, then you would have been a bit out of luck. You'd have to scale up the recipe to be 4 times the size so it makes at least as much as the 4 ounce package.

We made a super simple change on our end so that this isn't the case and allows for greater flexibility in developing nutrition labels (and unit costing too). Now the Packages Per Recipe field only has to be greater than zero. In the case above, you can set the Packages Per Recipe field to 0.25 and the nutrition label will reflect an actual 4 oz package based on the 1 oz recipe you entered. 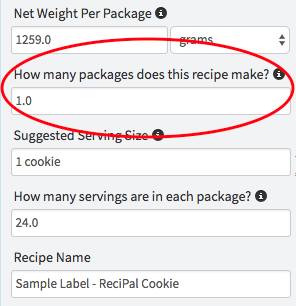 Now the Packages field can be less than 1, but still has to be greater than 0.

We think this gives ReciPal and our nutrition facts label maker quite a bit more flexibility, especially for recipe developers that aren't always working with recipes that are production scale, but still want production scale nutrition and costing information.