This is the seventh post in a series of interviews with successful food businesses. We’ll go over how they started, successes and failures, and general advice for other food entrepreneurs.

This week’s guest is Ed Martin, owner of Outer Limits Hot Sauce, which is based in New Jersey. If you couldn’t guess, they make rad hot sauce and are about to launch with two flavors and super creative labels from alternative artists. They wrapped up a successful Kickstarter campaign in November and are going to share more about their journey as well as how to raise money via crowdfunding.

There was a good article on raising money on Kickstarter earlier this week, which had great insights we'll echo here. For example, building your brand, customer base, and relationships BEFORE you crowdfund, and having realistic funding goals (<$10,000). Some interesting differences too - they didn't splurge on a video and had a secret weapon - the mystery donor. All the gory details below. 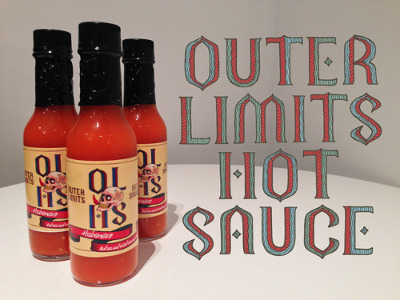 So how did you get into hot sauce?

I’ve always been into spicy food. I grow habaneros and lots of other peppers in my backyard, so I managed to get a bit more into it than most people. About three years ago I started making hot sauce, partly because we had all these peppers and needed to do something with them.

A true hobbyist. That sounds a lot like how SlantShack started. And you would just have hot sauce around all the time?

Exactly. We’d bring it to parties, have it out at our own parties, put it on nachos and that sort of thing. Everyone really loved it and we kept working on it, tweaking it to improve the flavor and make it more consistent between batches. Over time we’ve probably done a dozen or so flavors, and have narrowed it down to the top three. 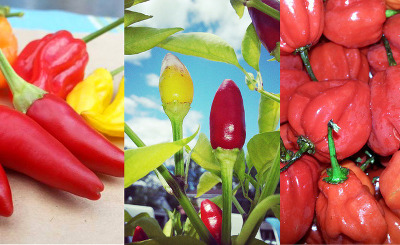 By local, we mean grown in the backyard.

And you’re launching with two, right?

Right. We’re launching with two flavors - Habanero, which is a standard peppery hot sauce flavor, and Jalapeno Lime, which is milder and for people not as into the hot side of hot sauce.

How did you narrow it down to those two and know that you were onto something?

We wanted to make sure that random people, not just our friends, liked it. I’m a big Phish and Grateful Dead fan, so we made a whole bunch of two-ounce bottles and set up on Shakedown Street with the other vendors. We gave some bottles of our hot sauce to other vendors that were selling food. We also set up our own table with just chips, giving out samples, and got the same really positive response. Almost universally, people were into it, so we knew we were onto something.

How do you differentiate yourself from all the other hot sauces?

One way we’re separating ourselves is by working with up and coming artists to do the labels for every flavor. Lots of people use hot sauce as their go to condiment and leave it on the table, so we want it to be a bit of a conversation piece and more than just a condiment.

My background is in the music business, I’ve worked with lots of artists, and that’s a natural thing for me to bring those two worlds together and to make it more than just food.

On top of that, it’s just a high quality hot sauce. We use fresh ingredients and try to source locally, which is easy in the summer months, but a bit more challenging in the winter. We’re working with a co-packer and we made sure to find the right partner there. Lots of co-packers won’t use fresh peppers and won’t freshly zest and juice limes, opting for pre-packaged ingredients instead. That affects the flavor and quality, so we made sure to go the extra mile and pay for what we think makes a big difference. 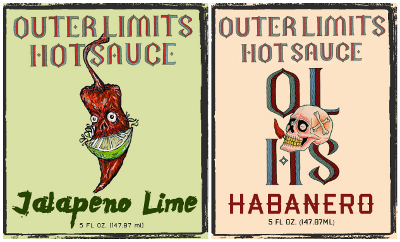 Co-packing is an important issue for lots of food companies. How did you find your co-packer?

Once we knew we’d reach our goal on Kickstarter, we started reaching out to co-packers. We worked with the Rutgers Food Innovation Center a little. They had a list of co-packers that I went through, but they weren’t great fits. The prices weren’t right, a lot of them didn’t help with sourcing ingredients, others had minimums that were too high for a startup food company like ours. For example, one had a 300 gallon minimum. 10 gallons makes 250 bottles for us, so 300 gallons is A LOT.

We found Palace Foods in Reading, PA, and they have been great. They specialize in helping startups like us by having smaller minimums, doing test batches, and being willing to make our recipes the right way.

We also made sure to get our scheduled process right at home before starting conversations with co-packers. It took me and 2 friends twelve hours to get the whole process finished – ingredient prep, production and bottling. We also sent samples to Cornell for our acid test, which has to be below a certain threshold to be considered shelf-stable. It was a bit of work to get all that done ahead of time, but that allowed us to hit the ground running once we starting talking to co-packers and they took us more seriously.

Let’s talk about the Kickstarter campaign. What made you consider that avenue of funding and next steps?

We were trying to make this happen and were going as fast as we could afford to, but we didn’t have the money to take the next step of doing production runs with a co-packer, labeling and design, and the legal aspect – licenses and insurance.

Being in the music industry, Kickstarter just made sense for us. It was a normal thing to do. There’s really nothing to lose. If you don’t raise enough for your goal, it’s no big deal. It’s also a great marketing tool and helped us get new followers.

A lot was definitely friends and family. But a lot of random people too. Some of the bands I work with on their social media campaigns were kind enough to post things for us, and that helped us out. We’d definitely see a big boost whenever one of them posted for us, so lots of random people connected to the bands contributed.

Your background is in social media. What expert advice would you give to someone thinking about launching a Kickstarter campaign?

My background definitely helped a lot. Before we launched the Kickstarter, we had over 1,000 followers on Instagram and a small following on Facebook. I know what works and what doesn’t, and was able to build a good following from using photos from test batches and doing lots of hashtags.

To build that following I probably posted 50 photos, using hashtags relevant to our product and audience - #hotsauce, #homemade, #handmade, various types of peppers. Instagram was the main thing for us. We have over 2000 followers now on Instagram, over 500 on Facebook. Twitter is a little slower for us.

Having that initial following before starting the Kickstarter really helped, as did my connections in the music industry that increased our reach. 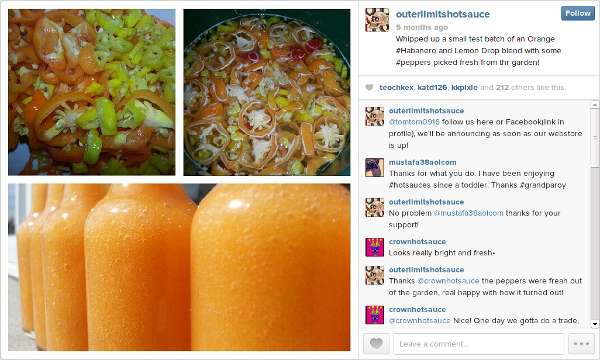 Notice the hashtags, likes, and conversation. Building a brand is what happens AFTER you post something.

You also had an interesting mystery contributor that really motivated others in the Kickstarter.

Yes! The other thing that helped us a lot was a random guy who called himself Dr. Von Bong. He donated $420, and put something up on his Facebook page that if we reach 420 Facebook followers he’d donate another $420. So he was kind of this “Mystery Donor”. That definitely generated a ton of excitement. He started these mini challenges that motivated others to contribute and join our movement.

If you’re smart and plan ahead a bit, you can probably create this yourself. If you have someone that can donate a decent amount of money, you can organize this yourself. It’s more than the money, because it generated excitement, got other people involved and made it a fun thing. The name was funny, the donation amount was funny, so it was a real feel good idea that everyone latched onto.

Now we’re working on fulfilling everything from Kickstarter. We’re waiting on finalizing a production date with the kitchen. We have to get the finished labels from our artists and once we have those, we’ll produce and fulfill orders.

And longer term, where are you going to sell Outer Limits Hot Sauce?

We’re launching a website after the Kickstarter orders are fulfilled, but we’re also trying to get into farmers markets here in Jersey, so Jersey City, Bayonne, Hoboken. My Dad is my partner in this and he lives in Long Branch where there are a number of farmers markets.

We’re starting to talk to retail folks as well, and that’s why we wanted to have our nutrition fact labels ready - even though we’re not required to have them at our business size.

That seems smart, to get ahead of the game, particularly if you’re thinking of doing more retail. How’d you find ReciPal by the way?

A lot of the co-packers we talked to offered to do nutritionals for us, but it was at a relatively steep cost. ReciPal just made sense for us, and I’d highly recommend it to other food businesses. They were helpful and really quick answering our questions, making us confident in handling the nutrition labels ourselves.

Ultimately, we want to get our own kitchen instead of using a co-packer. Have to wait for that though. There’s a lot of red tape that goes with food, so it’s much easier to start with a co-packer.

Right now Outer Limits isn’t my full-time job. I’m still doing social media for a few bands and working with local shops, but the goal is to keep pushing with the hot sauce, get it into retail and eventually run it full-time and get our own kitchen space for it.