But since lot codes tend to be fairly similar for a given product — typically a prefix that identifies the product plus some representation of the date the batch was produced — we thought a little automation would be a nice feature.

There's A Formula For That

Now you can set a formula for your lot codes. For individual recipes you can input a prefix to use as well as a formula to calculate the lot code based on that prefix and the date of the production run. You'll find this option when you open a new production run (on the Daily Production Run page).

Press the green button to set your formula!

The form includes lots of notes on how to build a lot code formula along with examples of different outputs. You can also set the formula as the default to use across all your recipes simply by checking a box(the prefix would still be unique, however). 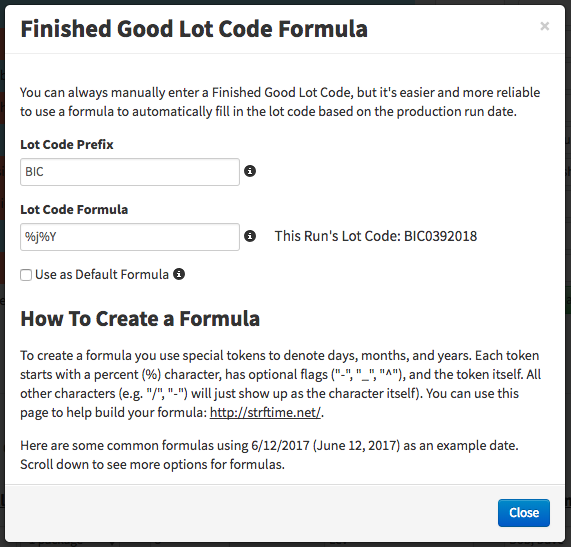 Set your prefix and formula here. Scroll down to see the formula rules and examples.

One of our customers has a neat way of using lot codes to maximize efficiency in lot tracing their products. They use several different kettles for mixing ingredients and incorporate a notation for the kettle that's used in a production run into their lot codes.

That way, if they ever have a recall related to contamination from equipment, they can see exactly what came out of each kettle on that date and avoid recalling product that never touched the equipment. If you need it, you can include that level of detail in the codes you generate in ReciPal by modifying prefixes or the calculated formula.

Have questions, comments? Leave them below.