One question that occasionally gets asked is "Can I automatically switch one ingredient out for another in all of my recipes?" Well, the answer was no, but now it's yes! Read on for the scoop on this new feature. If you're a customer with lots of recipes and [particularly] duplicate ingredients, this one's especially for you!

What The Feature Does

For now, this feature is only available to subscribers. Most of the time (basically always), changes we make are for everyone, but this one only serves a purpose if you have many instances of the same ingredient across many different recipes, so it's really only useful to subscribers with lots of recipes.

With it you can:

You'll find the option to replace ingredients as a link on the "View Your Recipes With This Ingredient" page.

Just click on the link to bring up a search box, type in your search term, choose the ingredient you want to use, and click "Replace." That's it! 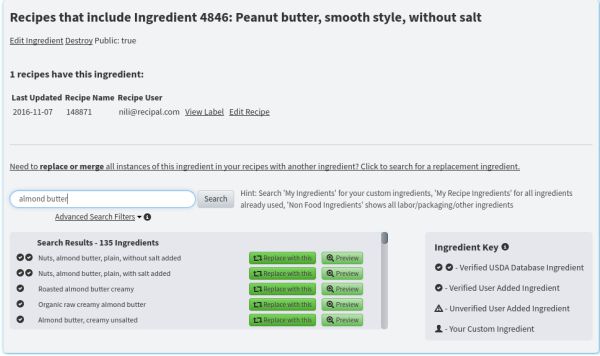 The search is on!

What The Feature Doesn't Do (AKA Be Forewarned!)

Let Us Know What You Think!

Do you want the ingredient statements and costs to be merged if the replacement ingredient is already being used in other recipes? Do you have other ideas? Use the comments below to tell us. We really want to know!

Features Tips And Tricks
Learn why hundreds of food entrepreneurs already use ReciPal to manage their recipes, costs, and create nutrition labels.
Sign Up Absolutely Free